Woodworm is a common issue that can eventually result in timber frame work and floors needing to be replaced as a result of an infestation.

This is one of the most frequent cases of timber damage which can have a long lasting effect on the framework of a building.

Woodworm is the term given to the larval stage of wood boring insects, which sees egg laid into small cracks on the surface of the timber.

Woodworm are usually a creamy white colour and have curved bodies. It is highly unlikely you’ll ever actually see woodworm, as they stay hidden munching away on timber until they are fully grown.

The common furniture beetle is one of the most common wood boring insects you will find in your home. It extensively bores into soft and hardwood with the grain, creating noticeably round tunnels that measure approximately 2mm in diameter.

The common furniture beetle or common house border (Anobium punctatum) is a woodboring beetle originally from Europe but now distributed worldwide. In the larval stages it bores in wood and feeds upon.

The furniture beetle only infests dry, seasoned sapwood of hardwood and conifer trees. It causes more damage in structural timbers and joinery than in furniture. The females lay their eggs in cracks in the surface of wood or inside old exit holes. The eggs hatch into larvae in a few weeks and bore into the wood. 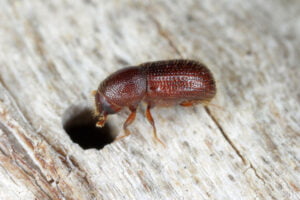 The bark borer favours bark covered softwood and tends to create 2mm diameter tunnels close to the surface of the wood, leaving behind rounded waste that is coloured according to the wood inhabit.

Although the rounded tunnels this beetle creates are are kept near the surface of the timber, this insect can still cause significant amounts of damage to all types of softwoods.

Wood boring weevils use any wood that is already damp and decaying as a source of food for their larvae.

Wood boring beetles are species and families of infects whose larval in most cases or adult form feeds off and destroy wooden materials.

The Weevils are a large class of Beetles, having distinct snouts, from which spring the antennae or feelers. There are two species of Weevil which are found in structural timbers-Pentarthrum huttoni and Euophryum confine; they have no popular names. They are small, dark brown or black beetles, about 1/8 inch in length, and are easily distinguished by their pronounced snouts.

The wood boring beetle creates a rough oval shaped tunnels, which are just underneath the wood and often break the surface. For this reason they can cause visibly high levels of destruction to both furniture and wooden support beams.

Woodworm – what to look out for

Crumbling wood is caused by multiple woodworm exit holes and can be found around corners or edges of roof joists or floorboards.

Tracks inside the wood is another way of identifying woodworm. As the wood comes away you can sometimes see the paths followed by the woodworm grubs and adult beetles.

Another sign that you have a live woodworm infestation in your property is the presence of frass being left by the beetle when it chews its ways through the wood. Frass is a dust created by woodworm. The frass or woodworm dust is light in colour and looks almost like very fine shavings.

One way to treat woodworm involves exposing the affected areas to a chemical spray that will exterminate the insects upon exist. If this is your treatment of choice, the premises must be vacant for a period of at least an hour. This is likely to be the most common treatment in most cases of wormwood caused by the Common Furniture Beetle.

Other ways of treating wormwood is a gel treatment that is injected into the timber and spread across the surface of the material.

The most common insecticide used to control woodworm is Permethrin though growth inhibitors are used by some manufacturers. Permethrin is found in most woodworm killers.

Do You Have Any Questions?